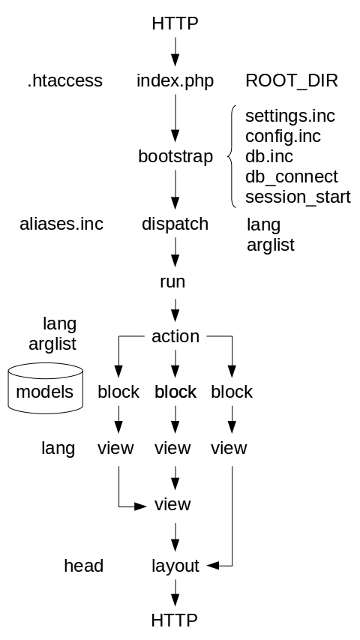 The file .htaccess at the root of the website defines a single entry point for all HTTP requests: index.php.

index.php initializes the constant ROOT_DIR, sets up the context of the program with the function bootstrap then processes the request by calling the function dispatch.

bootstrap loads the configuration files settings.inc, config.inc and db.inc then opens the connection with the database and starts the session.

run loads and executes the code of the requested action.

An action controls how the different parts of a document are made by calling building blocks or views. An action or a block interacts with the data model through specific functions. An action is generally associated to a URL. A block, never. An action can be called by another action. A block can be built with other blocks. Views can be language dependent or not. Some views are integrated by the view of the action. The others are directly transmitted to the function layout.

The file for an action or a block can be found in a sub-folder. EXAMPLE: The action error/notfound is coded by the file notfound.php in the sub-folder error of the folder actions.

NOTE: A .phtml file mainly contains some HTML improved with some JavaScript and more or less PHP to format the content and the parameters of the view.

Generating the complete HTML document is done with the function layout of the engine. This function is always called at the end of an action. It passes the parameters accumulated by the function head and possible trace messages to a final view. The .phtml file of a final view is in the folder layouts. In general, a complete document is generated with the view standard but using other views to generate specific documents with different structures is quite common.

All the configuration files included by the code are in the folder includes and have the extension .inc.

The functions of the data models are coded in the .inc files of the folder models.

Processing the action home, which responds to a request on the home page of a website, will mainly use the following files: